CableWholesale will be closed on Monday, May 30 in observation of Memorial Day. We will be open for our normal hours on Tuesday, May 31.
Product Filters 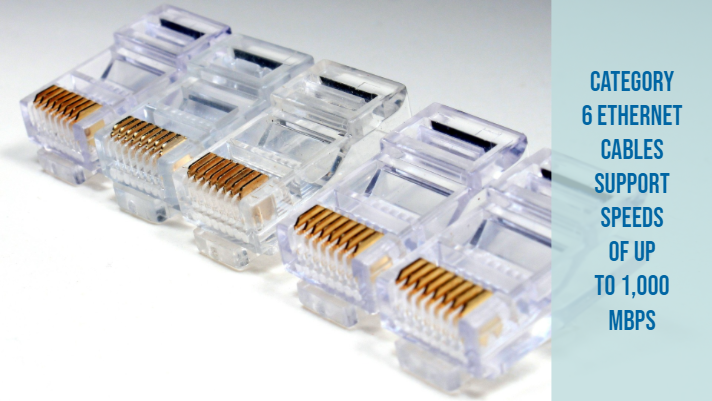 Most articles about Ethernet and WiFi treat the technologies as if they are in competition. However, Ethernet and WiFi have different strengths and can be viewed as complementary rather than competitive. Whether the network is in a home, office, or retail location, relying solely on a wireless network misses out on the significant benefits of Ethernet, and vice versa. Here are five considerations when building a network that includes both Ethernet and WiFi:

Category 6 Ethernet Cables contain four wire pairs. To obtain the highest level of performance, all four wire pairs are used for signaling. As a result, category 6 Ethernet cables support speeds of 1,000 Mbps. The most recent WiFi standard, 802.11ac, supports theoretical speeds of 1,331 Mbps. However, tests have shown that actual speeds do not match the theoretical speed. Rather, 802.11ac WiFi performs closer to 300 Mbps, which is much faster than the previous generation of WiFi, but still slower than category 6 Ethernet cables.

Ethernet Has Lower Latency Than WiFi

Latency is the time for a request to reach a server and for return signal to reach the requesting device. Thus, users associate higher latency with lower speeds because higher latency means a longer wait for a response. While latency can vary depending on network traffic, WiFi has an inherently longer latency than Ethernet because the request must be encrypted at the device and decrypted at the WiFi router and the return signal must be encrypted at the WiFi router and decrypted at the device. Typical latency in an Ethernet network is around 1 ms while latency in a typical WiFi network can range anywhere from 2-80 ms.

Ethernet is More Reliable Than WiFi

Ethernet is More Secure Than WiFi

WiFi is More Convenient Than Ethernet

Where WiFi clearly beats Ethernet is the convenience, particularly for personal devices such as cell phones and tablets. Aside from being free from cables and an Ethernet connection to the wall, most personal devices configure themselves for the network once the WiFi password is entered.

There is no reason to replace an Ethernet network with a WiFi network. In fact, an Ethernet network is much faster (both in terms of bandwidth and latency), more reliable, and more secure than WiFi. Conversely, there is no reason to replace a WiFi network with Ethernet, particularly with the ubiquity of personal devices. Rather, each can be used for what it is best suited. Ethernet can be used for applications that require speed (such as data transfer of large files, streaming multimedia, or gaming), reliability (such as video conferencing and VOIP), or security (such as transferring confidential business or personal information). Similarly, WiFi can be used for applications that require convenience, such as web browsing on a personal device.