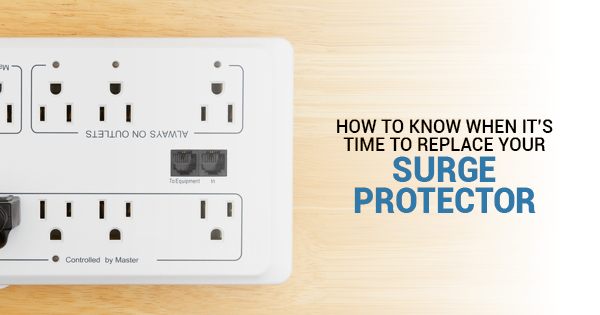 When you purchase surge protectors for computers and other devices, you’re making an investment that can safeguard your technology (and your valuable data) for the foreseeable future. That said, like your smartphone cables and other tech accessories, your power strip surge protector won’t actually last forever — even if it’s of the highest quality.

Actually, surge protectors are designed to have a finite lifespan. When surge protectors for computers, television sets, and other gadgets absorb that extra energy — thus making sure your devices stay safe — those surges will deplete the protector’s ability to do its job in the future. Surge protectors get rid of that additional voltage by diverting it to a metal oxide varistor (MOV). Once the MOV is exposed to a certain amount of surges, it’ll start to degrade. And when that happens, you’ll need to replace your surge protector completely.

Fortunately, this doesn’t happen right away. If you’ve purchased a reputable surge protector, it should have an energy absorption rating of 2500 or more (particularly if you’re using it to protect a computer or a home entertainment system). While that joule rating represents quite a bit of protection, it doesn’t last forever. In an article posted on the How-To Geek website, contributor Chris Hoffman explains:

There are a few different ways to know whether it’s time to replace your surge protector. Some surge protectors for computers and other devices will let you know (usually, with a light-up component) when your devices are no longer being protected. That said, you can’t always rely on this warning system to be accurate. If you know for a fact that your protector took a big hit during a storm or outage, you may want to consider replacing it just to be on the safe side. And if you can’t remember when you purchased your current surge protector — or you know for a fact that it’s more than two years old — it’s probably time to replace the unit to ensure your devices won’t suffer any unexpected damage. Keep in mind that surge protectors are relatively inexpensive, so replacing an outdated one won’t cost you much. But not replacing it can cost you a lot.

Purchasing a high-quality surge protector can provide you with valuable peace of mind. It will ensure no harm will come to your devices due to an energy surge and that no information will be lost. However, a single surge protector doesn’t represent a permanent solution. In order to keep your devices protected at all times, you’ll need to keep a record of when your surge protector was purchased and of any big energy surges that your protector might have redirected. That way, you won’t have to guess whether your devices are actually safe; you’ll know for sure.