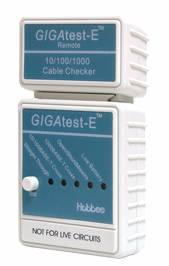 GIGAtest-E is specially designed to test the full range of the ever-expanding Ethernet cable configurations. It will identify if the wiring of UTP/STP cables are straight-through, 10/100BASE-T crossover, or 1000BASE-T crossover. With the included Remote unit, cables can be tested either before or after installation. The GIGAtest-E will verify compatibility of network cabling and network devices, as well as determine cabling faults. This unit will identify if existing wiring network will support for a gigabit network upgrade.

It does what it says it does .. Plug it in and check the integrity of your lines. Answered all our questions we could not have answered otherwise with long network cables running all throughout our office. Nice piece of equipment :)